LEGO should be a household name to everyone – the range of interlocking block construction toys have been popular for decades and are now one of the biggest toy companies in the world.

At the recent Blocks on the Rocks Expo in St. John’s, an endless display of LEGO constructions was on display as builders created their own forms of expression through LEGO, creating worlds far larger than our own.

The goal is to create a community for everyone who plays with LEGO, says LEGO builder Matthew Cooper.

“I’ve been doing exhibits and events since the beginning, for about six years,” said Cooper, a LEGO builder from St. John’s. 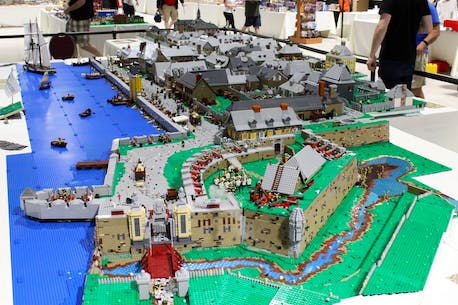 “Bricks-n-Minifigs owner John started it all. He noticed the resurgence of younger men building with LEGOs and said there was enough for a bunch here, and LEGO recognizes now the groups. We learned that we weren’t alone – there were hundreds of people building who didn’t know each other and, because of these events, we continued to grow.

Cooper has loved LEGO ever since he got his first set on his seventh birthday. Over time and as he got older, around the age of 12, he decided to ditch the LEGOs and focus on more teenage things, like girls.

It was only at the age of 24 that he decided to buy a set again.

“So I was in South Korea when I was teaching English when I found a remaster of this very first LEGO set I ever had,” Cooper said.

“I saw it and said, ‘Would it be weird if I bought this set?’ And my girlfriend at the time said, “No, I think that would be cool,” and I said, “If you think that’s cool, I’ll definitely buy that. We call it our dark ages.” , the years when we didn’t use LEGO, and that’s when mine ended; I never had a collection when I was younger, but now I have a huge collection.

His collection is so large now that he has half a million individual LEGO pieces. Cooper says he uses LEGO to express himself creatively and hopes to build worlds so intriguing that you feel like you’re living in the LEGO world.

For this year’s exhibition, he created a space-themed world – a world so complex that it took him six months to create.

“It’s a passion for me,” Cooper said.

“I would love to do this full time but there’s no money in it. So the biggest thing for me is when the kids come in and they say, ‘Wow, c ‘did you build it?’ Another thing with me is that I want it to be an immersive world – when you walk in, you become part of their world, and the sets on the shelf don’t. It’s a lot of work, but the reaction is worth it.

There are now shows being held in Atlantic Canada, but Cooper wants people to know they’re not for professional builders or huge, intricate designs. Rather, he says, these exhibits are for all exhibits, large and small, for those who share their love of LEGO with one another.

If you’re thinking of taking your building to the next level, Cooper encourages people to give it a try.

“With anything, you’re really interested and want to take that step, so just do it,” Cooper said.

“My biggest suggestion is that when you say you want to do something, do it right away. Don’t delay, do what you want to do every moment of your life – and that applies to everything, not just LEGO.

A standout point for LEGO is their age restrictions; most boxes indicate an age limit of three to 99 years. They encourage all ages to use the toy.

Just down the hall from Cooper’s World was the 50-year-old Stephen Churchill exhibit.

“I collected LEGO as a child, but fell out of it around 17, when I was too mature for LEGO,” Churchill said.

“It wasn’t until I turned 30 that I bought a set on a whim and started over with commercial sets.”

Eventually, however, the St. John’s resident says he “got to a point where I wanted a specific set that didn’t exist. So, I started researching how can I start designing my own sets. .”

It was through various exhibits and events that Churchill saw a void or a niche he could fill: creating real-world exhibits.

“One thing we always get at these shows is you should build this or make this your next project,” Churchill said.

“So, I really started listening to that. This led me to start working on Signal Hill, which was originally the tower, but since then I have added the terrain and it has started to get a lot of attention.

To complement this display, Churchill covered all of the Cabot Tower terrain with his own camera to use as a reference. Making sure he’s captured every piece of ground and the review process is the hardest part, he says.

When Signal Hill ended, he wanted to do something bigger and better. He turned to another key Newfoundland landmark, the first building you see through The Narrows: The Basilica.

“It’s an art form, like any other,” Churchill said. “He has his own restrictions, but that’s part of the challenge. It’s very difficult to build a half brick, you have to build in whole numbers unless you’re very advanced and that’s kind of what I like, finding that technique that can elevate the next build.

Building through LEGO helped Churchill find a sense of inner peace. He says that thanks to LEGO, he can escape the burdens of the real world and relax.

He recommends everyone try it, even if it’s not a larger-scale build.

“It’s a great relaxing pastime, in the sense that you can, when you’re in the zone, turn off your brain,” Churchill said.

“It’s a very zen building, from hand to next piece. Sometimes you don’t look at anything for half an hour, just trying to get the right angle. Most of the time it’s just adjust and rebuild, but in those few moments the only thing that matters is the building, which is nice to have someday.