National Portrait Gallery, London Until May 19

There are not many exhibits where magnifying glasses are available at the entrance. But such is the case at Elizabethan Treasures: Miniatures by Hilliard & Olivera new exhibition featuring 90 miniature portraits from the late 16th and early 17th centuries.

Oval or round in shape, these paintings are often no more than five centimeters high and four wide. From the outset, one is amazed at how such great resemblances could be achieved in such a small space.

The exhibition is dedicated to the two best miniaturists in English history: Nicholas Hilliard and his pupil, Isaac Oliver. They were held in fame no different from Shakespeare, receiving commissions from whoever was anyone. 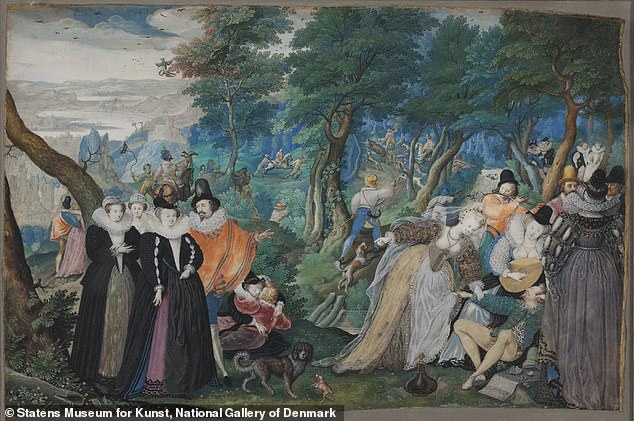 The marvelous spectacle is dedicated to the two best miniaturists in our history: Nicholas Hilliard and Isaac Oliver. Above: at Oliver’s A Feast in the Open Air: Allegory on Conjugal Love

A ruddy-faced Sir Francis Drake appears, fresh from his knighthood after touring the world. So does Sir Walter Raleigh, full of self-confidence, adorned with jewels and wearing a white ruff so large it takes up half the image.

Both of these works were by Hilliard. Elizabeth I’s favourite, Robert Devereux (the 2nd Earl of Essex), meanwhile, was portrayed by Oliver, with a beard grown during his recent campaign capturing Cadiz from Spain.

Miniatures often marked a major occasion in a subject’s life. 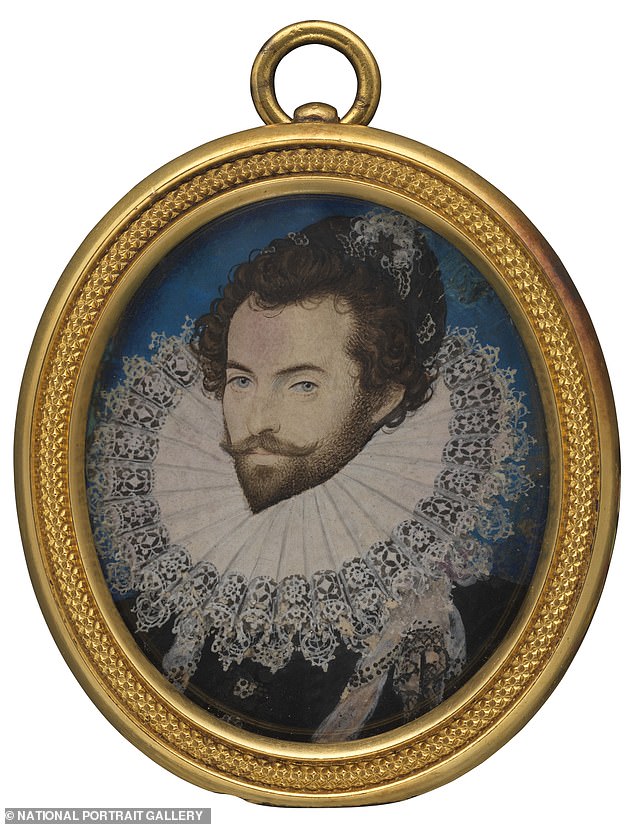 Sir Walter Raleigh, full of self-confidence, adorned with jewels and wearing a white ruff so large it takes up half the photo (above) was the work of Hilliard

They were made by painting in watercolor on animal skin, using tiny squirrel hair brushes. According to Hilliard himself, the miniaturist’s practice was meticulous – it was forbidden to speak to the model while painting, for example, or “flying spit” might affect the result.

Overall, he seems to have been the better flatterer of the two artists; Oliver the best truth teller. The richest evidence of this is in portraits of the queen in her later years.

Where Hilliard portrays an ageless, eternally beautiful monarch, Oliver includes the creases on his forehead. 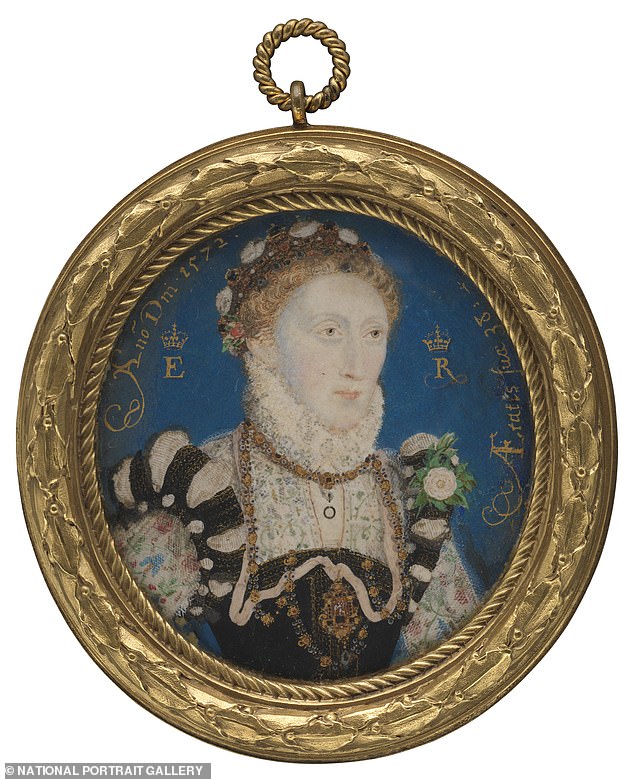 Hilliard appears to have been the better flatterer of the two artists depicting an ageless and eternally beautiful Elizabeth I (above), while Oliver includes the creases on her forehead

It is a wonderful spectacle that is sure to attract large crowds. However, crowds are not exactly conducive to the enjoyment of works as complex and small as these. My advice is to avoid peak hours.

In the wake of the Reformation – and the banning of religious images – the miniature portrait became extremely popular.

Along with landscape painting, it is one of the few genres of art where Britain has ever dominated the world – and Hilliard and Oliver represent this genre at its peak.

Part of the Tate Modern’s mandate is to decide which recent artists deserve greater exposure – and then give it to them. The latest is the Austrian sculptor Franz West.

West is anything but a household name, yet Tate curators say he is “one of the most influential artists of the past 50 years”. To what extent do they manage to convince us of this? Not a lot.

West was once described as the “godfather of grunge”. Which is a polite way of saying his works are ugly. They are mostly just lumps and clumps – abstractions that need form (Untitled 2007). 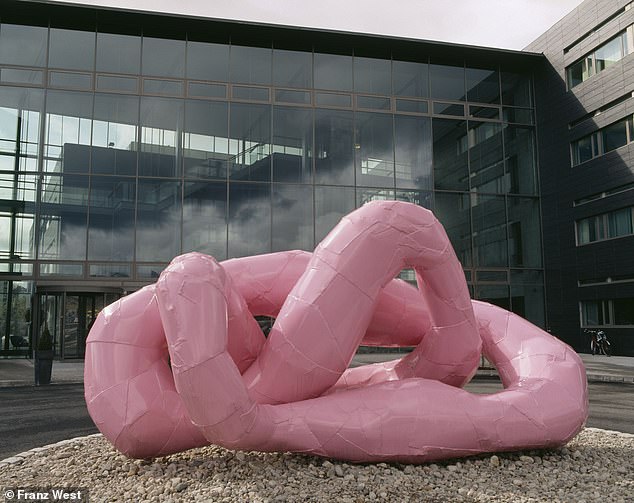 Franz West is anything but a household name, yet Tate curators say he is “one of the most influential artists of the past 50 years”. Above: Pink/Drama

Visitors are invited to step behind a curtain and play with West’s “Adaptives” – essentially steel rods with drops of plaster on the end. It sounds like forced fun, if it can be called fun at all.

His Lemurenkopfe the sculptures, meanwhile, evoke monsters without eyes. In a smaller, darker setting they can prove unnerving, but they lose their impact due to the Tate’s white walls and cavernous, open layout. 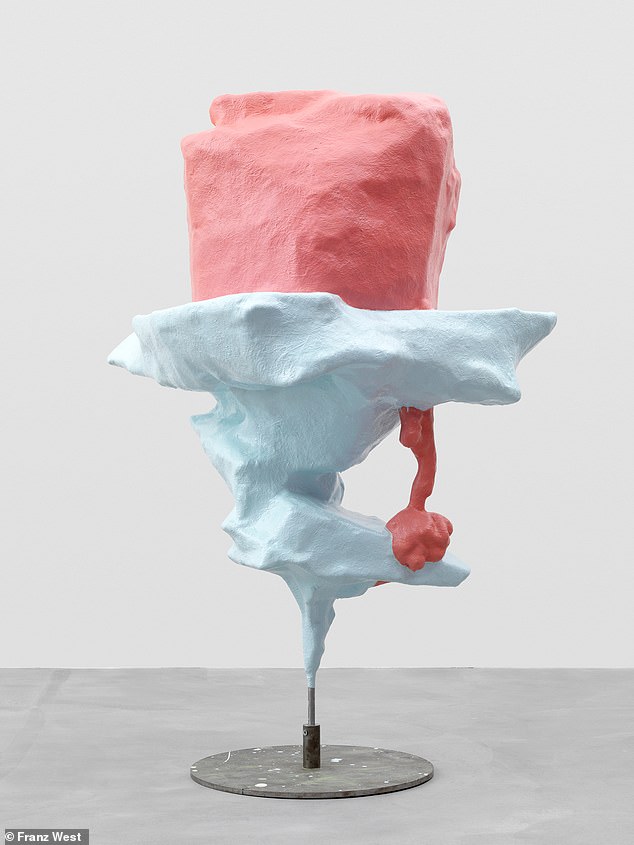 West has been described as the “godfather of grunge”. Which is a polite way of saying his works are ugly. They are mostly lumps and clumps; abstractions that need form. Above: Untitled 2007

West’s pic arguably came with furniture made in the ’80s. Psyche is a dressing table with three adjoining mirrors placed at unflattering angles and a purple stain on the tabletop.

A favorite West of the art world may be, but there are no signs that it will soon become a hit with the general public.