In recent years, many new creative ideas have emerged in the field of art. One such creative, yet thought-provoking idea is the miniature sculpture made out of pencil leads. Ibrahim Belal is an art teacher who organizes workshops for adults and a sculptor with a passion for making miniature statues from pencil leads. He is the first to introduce such an art form to Egypt.

“I graduated from Cairo Law School, but I’ve always had a passion for art. So, after graduating, I decided to work in the field of art. I started studying art and then organized my own adult drawing classes,” Belal said. “Three years ago, I saw a miniature statue in pencil lead by a Taiwanese artist that I liked it a lot, so I decided to switch to this kind of art and work in this field.

“The moment I saw the miniature pencil lead sculpture on the internet, I was curious to know how it was made. I took a pencil and started many unsuccessful attempts because I didn’t know any details of it at first. I was just imitating the idea. It took me about 20 tries before I could make my first sculpture, a heart shape, with pencil lead,” he added.

“After this successful attempt, I became more confident and believed that it was possible to do something more. I started doing more sculptures until I got used to it,” said he said, adding that it took a lot of practice for him to be able to control his hands while working so as not to mess up the sculpture.

In order to achieve the best results, a carver should use good quality lead that can be successfully worked. “The size of the lead of the pencil is not so important. Once I made a sculpture from a piece of lead 0.5 mm thick and some even smaller ones. The problem is the quality of the material used. The pencil lead must be 100% lead with no impurities, otherwise a statue may disintegrate. The lead also needs to be flexible enough to work with,” he said.

Belal uses tools like a magnifying glass and a detail knife resembling a box cutter but shaped like a pen with a very sharp edge like a medical scalpel to work on the lead. A year ago he started using a microscope, which gave him even better results.

The sculptures he made are displayed behind a magnifying glass so that people can see them clearly in the various galleries where he exhibits. He made around 50 pieces, including a miniature sculpture of Tutankhamun’s famous mask, a statue of Akhenaten, a statue of Amenhotep III, one of Queen Hatshepsut and one of Queen Nefertiti.

His favorites are mostly ancient Egyptian themed carvings. “Not all of the elements of my work people like, and vice versa,” he said. “I like sculptures related to the ancient Egyptian civilization because it is my civilization. This is the main reason why I started to learn and develop the art of miniature sculpture,” he added.

“I have already exhibited twice. The first time was at the Museum of Islamic Art in Cairo a year ago for two weeks. This was featured in celebration of the museum’s 100th anniversary. The second time was this year tourathuna (Our heritage) cultural fair.

It is because the sculptures he makes require special equipment for people to see them that he has not been able to participate in many galleries. But there are miniature sculpture galleries in many Western countries, including France and the United States. It is because this type of art is not known in the Arab world that Belal wanted to be the first to work in the field and at the same time support Egyptian culture by making miniature sculptures of famous Egyptian artifacts, wanting to reintroduce them to people. in miniature form. 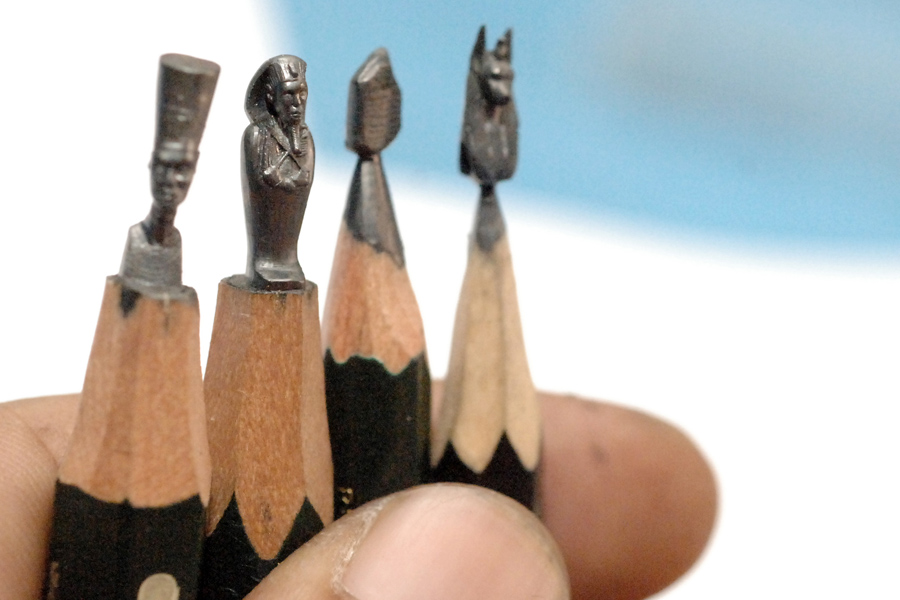 “People today don’t recognize anything other than what they already consider art, not even the artists themselves. Thus, they are amazed by the miniature pieces without recognizing their artistic importance. It is because people know little about this form of art that they are not interested in it. They see anything new as unusual or not even good art, unfortunately,” Belal said.

“As a result, I do everything by myself and no one supports me. However, I am currently organizing an exhibition at the Cairo Opera House, which is also the result of my own efforts,” he added.

“There are people who are curious and eager to learn this art, but it would be difficult to teach them because not only do they need to have some artistic knowledge, but they also have to show considerable perseverance. If the lead breaks during work, you have to start all over again, for example. But if an artist truly has a passion for art, they will keep trying again and again, Belal said.

“I met a lot of people like this while teaching my classes,” he said, adding that he considered starting a course in this area, especially if there were students who shared his passion. “I wish I could find such students because I love teaching,” he said.

“A potential student in my miniature sculpture class would need to have some knowledge of the art of sculpture because we use the same techniques used in larger sculptures or conventional sculpture,” he said. declared, the only differences being the size and the material used. .

Belal would like support from the Ministry of Culture to raise public awareness of miniature sculpture and in favor of art in general. “I would like to organize a gallery in the Louvre museum or in the Berlin museum, for example, not only in the Egyptian or Arab museums”, he concludes.

* A version of this article appeared in the January 20, 2022 edition of Al-Ahram Weekly.