VSConfession time: the thought of a visit to Eastbourne doesn’t necessarily fill my heart with a swoosh of joy, especially on a dreary day like this, with a strong salt laden wind beating down walkers and sends the dogs wading along the waterfront; there’s a reason the city has been nicknamed “God’s Waiting Room”.

However, things are about to change. Next year, the rather swanky Towner Eastbourne art gallery – one of the largest of its kind in the south-east of England – will host the Turner Prize. Is Eastbourne about to dust off the cobwebs and bask in his newfound street cred? Maybe even challenge Margate for the arty South Coast crown.

In the meantime, I came to town like part of a cultural trail through East Sussex. It was created by Sussex Modern, an alliance of local businesses and cultural institutions, and is one of many routes in the area aimed at encouraging visitors to ‘hit the dots’ of all the county has to offer. offer, during a day, a weekend or more.

Right now you can see Temporary words change everything, Nathan Coley’s 2007 Turner Prize-nominated installation of large, illuminated text sculptures, in locations ranging from the roof of a multi-storey car park in Eastbourne to a lonely beach in nearby Newhaven. About a 20-minute drive north of the latter – at Glyndebourne, the country house that hosts the annual opera festival – is a temporary exhibition of work by Maggi Hambling including diptychs and ink drawings.

Despite the stinking weather, my spirits lift upon reaching the Towner Eastbourne, for inside the rainbow-painted modernist building is a fascinating display of the collection amassed by patron and gallerist Lucy Wertheim, who has supported relatively unknown artists during the interwar period – all were young, many were women, and it was she who gave them exhibition space in her central London gallery, until it closed in 1939 .

So there followed a few enjoyable hours, squinting at muted country scenes and figure studies by lesser-known artists such as Katharine Church and Sylvia Melland, alongside more recognizable names: an exquisitely sculpted head of a young girl by Henry Moore and a small painting by Victor Pasmore of the Palace Pier in Brighton, looking sullen on a day of similar bad weather.

Later, on a tour of the Towner’s archives during which visitors are allowed out of the metal shelves housing the overflow of its treasures, I discover images of Sussex at its best by Eric Ravilious, the artist -illustrator who has regularly depicted the South Downs in their gloriously chalky clarity. As I leave Towner and travel north, the gentle green ripples of the national park unfold like a series of its large etchings – its paths traced in dusty white and then, behind, the winding loops of the Cuckmere River as ‘she’s heading for the sea. Sussex is truly magnificent. And if I look biased, you’ll have to forgive me; I was born in Sussex, brought up, retired a bit then came back, so of course I love the place. Besides the obvious attractions of the sea and the dunes, it has pretty villages and gardens.

Vineyards are also a contemporary feature of its landscape, and as I approach Rathfinny Wine Estate, my eyes gaze across the gentle uplands where downy sheep graze, and across the chalk hill of Litlington’s white horse, before settle on the spreading of its southern slope. Here, rustling in the ever-present breeze, are bright green vines arranged in endless rows of corduroy. The domain runs a smooth operation. You can stay the night, join a tour, be well and truly bumbooed (to use a cute Sussex word) and even be spliced ​​amongst the vines.

Instead, I settle for something more low-key – a delicious picnic-style lunch in the Flint Barns dining room, accompanied by a few glasses of the estate’s superb sparkling wine. It all makes for a nice set up for my next cultural stop, at Vanessa Bell’s Charleston Farm.

En route there’s Alfriston, one of Sussex’s prettiest and oldest villages, a place once loved by Bell and fellow painter Duncan Grant, and now basking in the glamor of its renovated Tudor half-timbered coaching inn , the Star, the latest hotel to join the Polizzi Le compendium. Bell designed a lovely lithograph of the village for oil company Shell-Mex, and at nearby Berwick Church you can admire the dubious 1930s murals of the couple, crowned arguably by the most camped Christ of all. time. 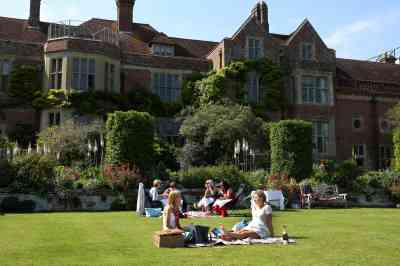 But even if you’re not interested in the work of the Bloomsbury Group, Charleston is still a must-see. Tattered kilim rugs, painted furniture, trinkets and faded furniture characterize its many rooms, then there’s Bell’s impossibly cramped bed and Grant’s cluttered studio. Even if you look closely, it’s nearly impossible to absorb all of the artistic elements that showcase their bohemian lifestyle, even though contemporary art is popping up in Bell’s attic studio right now: a work by Turner Prize-nominated duo Ben Langlands and Nikki Bell, whose mirrored ceiling installation reflects images of beautiful Charleston Gardens.

And oh, those gardens! Everything great about English horticulture is to be found in this meadow-like amalgamation of hollyhocks, rosehips and lilies, then lush hedgerows backed by high flint walls and a dreamy lake. Think of the beautiful gardens of Glyndebourne in miniature – which I enjoy later in the evening from the shelter of a marquee. I came to see Figaro’s weddingand it’s a shame you can’t picnic outside, though some brave ones try to ignore the gloomy weather by shivering on their rain-spotted sheets.

Never mind, the opera is magnificent – designer Christopher Oram’s 1960s Seville beautifully evokes the city’s Moorish architecture through sets bristling with muted golden hues, while soprano Hera Hyesang Park, singing Susanna, has a voice of such exquisite clarity that sometimes I am moved to tears.

Adding a quick visit the next morning to Ditchling, home to a fabulous little museum featuring bold murals by Frank Brangwyn, my Sussex Culture Trail ends in the village graveyard. Here I find a memorial to famous Ditchling resident Dame Vera Lynn – and it occurs to me that in two days I met more female stars than male in painters, hoteliers and singers of opera.

This weekend has really been one of wine, women and song, and I raise my glass.

Louise Roddon was a guest at Sussex Modern, which offers downloadable cultural trail routes across the county (sussexmodern.org.uk)

How else can you get your dose of culture this summer? This summer, spread across Essex, is a wealth of cultural activities for all ages. Highlights include history and art tours at the Jaywick Martello Tower, free open-air big-screen cinema and art exhibitions at Focal Point Gallery in Southend and a book festival at 40 venues. Climate change issues take center stage with talks and debates on how to avoid food waste, and don’t miss the Global Village finale, featuring music, dance and culture from around the world, at Hadleigh Country Park on July 3 (explore-essex.com) 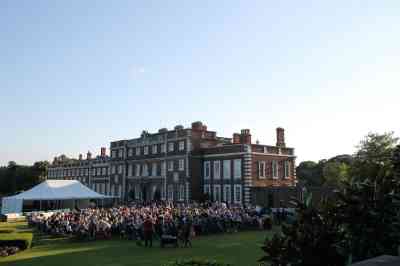 Are you going to Liverpool? Knowsley’s year-long cultural program promises everything from dance, comedy, art and theater to sports, food events and flower shows. Film buffs will enjoy hearing Liverpool-born screenwriter Jimmy McGovern talk about his work at the Shakespeare North Playhouse on July 23. For the kids, there’s the Owl and the Pussy-Cat Sculpture Trail, or opt for a summer picnic while watching As you like it at Knowsley Hall on August 4. Later in the year, make time for the traveling exhibition of Impressionist masterpieces at the Kirkby Gallery, starting October 10 (cultureknowsley.co.uk)

3. Heritage, comedy, gastronomy and theater in the northeast

There’s a busy schedule in Newcastle and beyond this summer – but for history buffs the absolute highlight is the return of the Lindisfarne Illustrated Anglo-Saxon Gospels. On loan from the British Library, the manuscripts will be at the Laing Art Gallery in Newcastle from 17 September. Rounding out the exhibit, and inspired by the theme of light and pilgrimage from the gospels, is the Illuminated Sheep visual art trail of 40 life-sized neon-lit sheep, created by the artist Deepa Mann-Kler. These will “graze” over 35 different locations across Northumberland and Tyneside, and can be explored on foot, by bike or by public transport (newcastlegateshead.com)