A photo is circulating in Facebook posts around the world that claims to show a topaz hummingbird, the “smallest bird on earth”. Another photo is shared in other posts with a similar claim. The claims are false. In fact, both images show a miniature figurine, not a real bird. The topaz hummingbird is not the smallest bird in the world.

This Facebook post from February 11, 2022 shares a photo that appears to show a small, brightly colored bird perched on a twig.

“It’s the ‘Topaz’ hummingbird, the smallest bird on earth,” reads the text above the image.

The same image has been shared in Facebook posts in various countries, including the United States, Nepal and Pakistan.

Similar Facebook posts shared a photo of a different “bird” alongside the claim that it showed the smallest bird in the world.

“The smallest bird in the world, the hummingbird. It flaps its wings 80 beats in one second,” reads a Facebook post in Sinhalese, uploaded on April 22, 2021.

It had been shared over 100 times before being deleted. 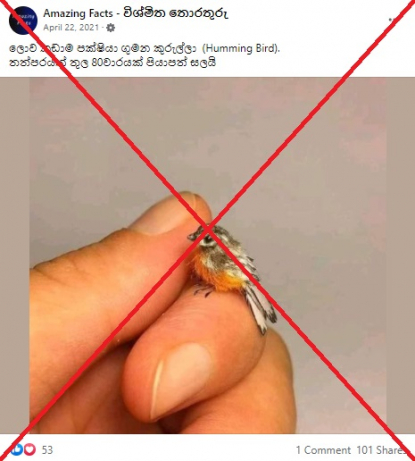 The image was shared via several posts on Facebook as seen here, here and here.

However, the claims are false.

The account belongs to a pair of India-based miniature paper-cut artists, Nayan Shrimali and Vaishali Chudasama.

The caption of the post reads: “156/365, number one hundred and fifty-six of our 365 days of miniature art ~ Crimson topaz Hummingbird…”

It features hashtags such as “#paperart”, “#artoftheday”, and “#papercutartist”.

The same photo was also posted the same day here on their Facebook page, with the same caption.

Their miniature bird artwork has been featured here and here.

The artists posted similar creations on the Instagram account as part of a challenge to make a miniature bird every day for a year.

Below is a screenshot comparing the photo of the first misleading post (L) and the authentic photo of the artists (R): 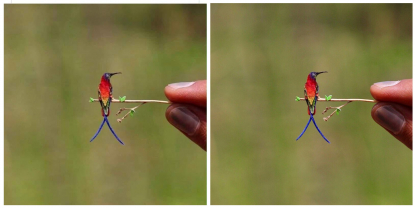 “Little Robin landed on my hand,” reads the caption for the post, which features hashtags such as “#miniature,” “#handmade,” and “#handsculpted.”

The same photo was also posted the same day here on the Malinik Miniature Animals Facebook page, also with the same caption.

The American artist behind the figurines, Ina Gancheva, told AFP in 2019 that a photo of a similar bird figurine she had made was also distorted in posts claiming she showed “the smallest bird in the world”.

Below is a screenshot comparison of the second misleading post image (L) and the artist’s authentic photo (R): 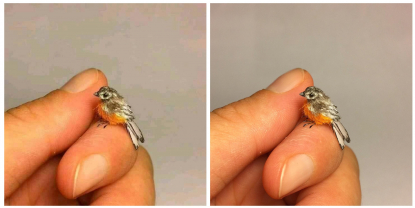 The smallest bird in the world

Professor Gary Stiles, an ornithologist at the National University of Colombia’s Institute of Natural Sciences, told AFP in 2019: “The smallest is a hummingbird native to Cuba that weighs up to two grams at a time. adulthood”.

Andrés Cuervo, curator of ornithology at the National University of Colombia, also told AFP that the smallest bird in the world is the Cuban hummingbird.

“It’s tiny, between five and six centimeters, weighing between 1.6 and 2.5 grams. They feed on insects and flower nectar,” he said.

According to Guinness World Records, the smallest bird in the world is the Cuban bee hummingbird, not the topaz hummingbird. 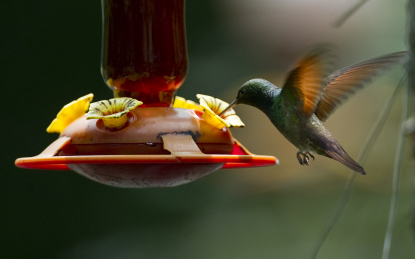 A bee hummingbird (Mellisuga helenae) sucks on a flower at the El Nido aviary, September 27, 2011, in Ixtapaluca, State of Mexico, near Mexico City. (AFP/Ronaldo Schmeidt)

The bee hummingbird has been on the International Union for Conservation of Nature’s endangered species list.