MANCHESTER, NH – On September 23, Patty and George Jones, co-owners of Jones & Horan, held an unreserved auction with no buyer’s premium and no sales tax. The auction took place in the Armory section of the Manchester Downtown Hotel, with the second part of the Dean Olson “All Things Rockford” collection and the first part of a collection of miniature portraits of the estate of two American ambassadors to France . The collection of portrait miniatures came from a client who was so pleased with the way the auction company handled his collection of vintage watches that he decided to re-engage Jones & Horan to sell his collection of portrait miniatures. Rounding out the sale are American and European pocket watches, vintage and modern men’s wristwatches, estate jewelry and timepiece accessories.

About 40 to 45 people attended the live auction, according to George Jones, compared to these days of well-illustrated and detailed online catalogs, a double-edged sword that offers a global audience but can act as a inhibitor for in- participation at home. Still, auctioneers said they were pleased with the results of the sale, particularly the $27,000 raised for the collection of around 36 European miniature portraits, all of which found buyers. “We’ll be offering about 30 more pieces in the spring,” George said.

A miniature enamel painting of a woman and soldier in a Greco-Roman setting led the miniatures with a final prize of $4,400. In addition to the finely detailed painting on metal, the overall presentation of the portrait was a tour de force as it was set in an octagonal frame adorned with seed beads and rubies and with engraved floral details on the front and back. back.

Leading the overall sale was a Rolex Oyster Perpetual Date “Red Letter Submariner,” which bidders took a deep dive to see appear at $26,500. It was part of a line of vintage wristwatches which are attracting a lot of interest in the company’s sales, mainly because Jones & Horan does not charge any buyer’s premium, so the hammer price is the price final.

In addition to the Rolex, another notable watch came from the American pocket watch section of the sale. It was a rare Waltham Crystal Plate serial number. 10, model 1872, 16-17J, 16S movement only, which came in at $21,500. 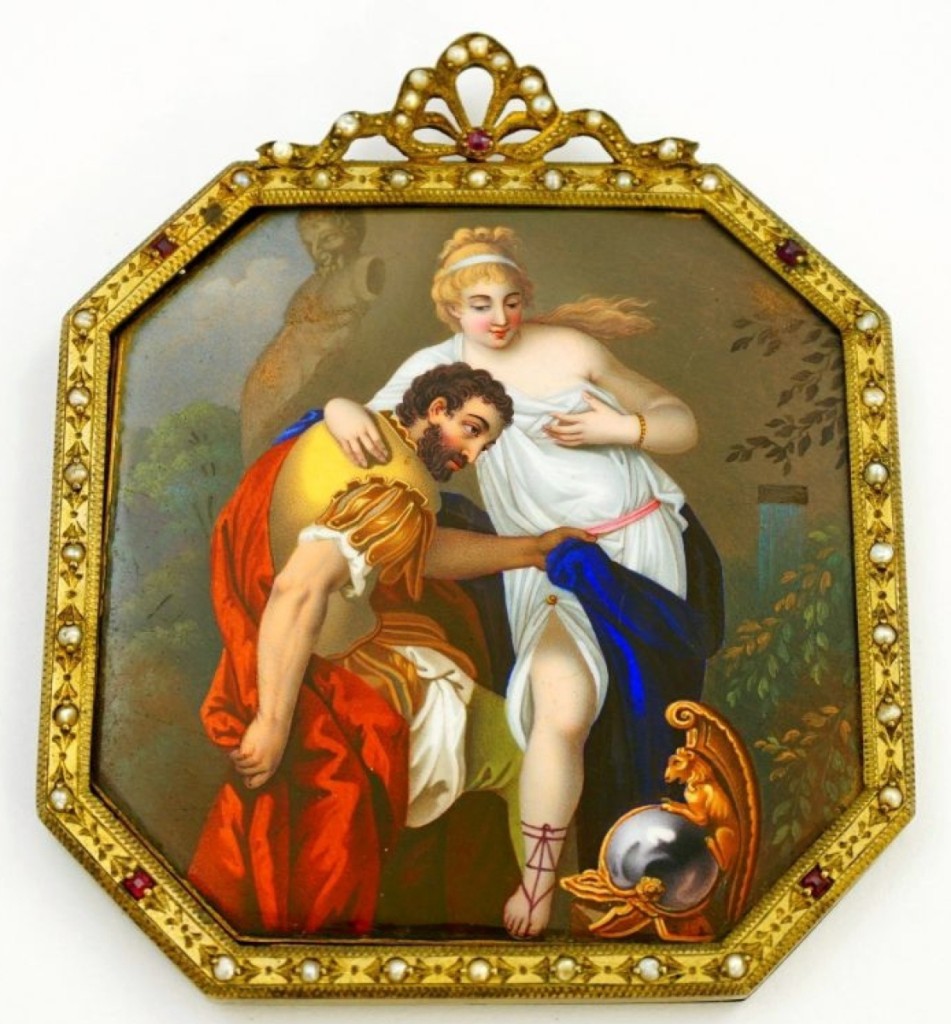 This miniature enamel portrait of a woman and soldier in a Greco-Roman setting sold for $4,400.

An Aximum King Pro Launch Edition, chronograph, automatic, heavy in 18 carats and with round brilliant-cut diamonds weighing around 12 carats tipped the scales at $13,000, while three of the top ten lots in the sale finished at 10. $500. This was – from the European pocket watch section – a Patek Philippe five-minute repeater with split-seconds chronograph in a heavy 18k rose gold hunting case with dark blue enamel case, and an unsigned tourbillon with spring escapement, fusee – and from the selection of vintage wristwatches – an Omega Speedmaster Professional Chronograph, Pre-Moon.

Along with the intricate and often beautiful movements of these antique and vintage watches, it’s interesting to see some of the specialized tools and machinery that go into making them. This sale had so much of the “All Things Rockford” consignment—a circa 1860 pink motor with a factory stool, which crossed the block at $16,500. “The condition of this workstation was immaculate,” George Jones said, “even though it came out of a basement in Illinois. It was used to put hundreds of decorations on a watch dial Catalog notes indicate that since the piece was located by the Olson family in a basement near the Rockford Watch Co. factory, it is thought to have originated there, although this cannot be documented. .

The jewelry lots were led by a platinum and diamond tennis bracelet with a total gross diamond weight of approximately 13.50 carats, which came to $8,000. Jones said customer referrals are increasingly contributing to the company’s jewelry sales.

The company’s next online-only auction, titled “Make Every Second Count Horology,” will take place October 11-18. And the next live auction is scheduled for January 2. For more information, 603-623-5314 or www.jones-horan.com.