VIENNA, September 7, 2022 — Analytical chemistry often requires the precise measurement of concentration changes of substances in liquids, on a timescale of seconds. Especially in the pharmaceutical industry, these measurements must be extremely sensitive and reliable.

A fingerprint-sized spectroscopy sensor developed at the Vienna University of Technology (TU Wien) has proven to be well suited for this task. Based on infrared technology, the device is significantly more sensitive than previous devices. Additionally, it can be used for a wide range of molecule concentrations and can work directly in liquid.

Sensor chip mounted on an aluminum printed circuit board. Courtesy of TU Wien/Hurnaus.

“To measure the concentration of molecules, we use radiation in the mid-infrared spectral range,” said Borislav Hinkov from the Institute of Semiconductor Electronics at TU Wien and head of the research project.

Infrared spectroscopy has long been used in gas detection. The achievement of the TU Wien team is the implementation of this technology on a finger-sized sensor chip specially adapted for liquid detection. Developing such a sensor was a technological and analytical challenge because liquids absorb much more infrared radiation than gases. The compact liquid sensor was realized in collaboration with Benedikt Schwarz from the Institute of Solid-State Electronics and manufactured at the Center for Micro- and Nanostructures, the state-of-the-art clean room at TU Wien.

“We only need a few microliters of liquid for one measurement,” Hinkov said. “And the sensor provides data in real time, multiple times per second. Thus, we can accurately track a concentration change in real time and measure the current state of a chemical reaction in the beaker. This is in stark contrast to other benchmark technologies, where you have to take a sample, analyze it, and wait up to a few minutes for the result.

The device is based on quantum cascade lasers and detectors that emit and detect infrared laser radiation with precisely defined wavelength based on their micro and nanostructure. The infrared radiation emitted by such a laser penetrates the liquid at the micrometer scale and is then measured by the detector on the same chip. Using these specially combined ultra-compact lasers and detectors, a detection device was created and its performance was tested in the first proof-of-concept measurements. 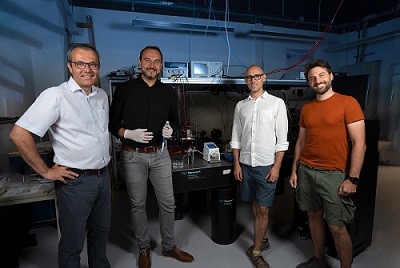 To demonstrate the performance of the mid-infrared sensor, the researchers selected a biochemical reaction in which a known model protein was heated, changing its geometric structure. Initially, the protein has the shape of a helix-like coil, but at higher temperatures it unfolds into a flat structure. This geometric change also alters the mid-infrared fingerprint absorption spectrum of the protein.

“We selected two suitable wavelengths and fabricated suitable quantum cascade sensors, which we integrated on a single chip,” Hinkov said. “And indeed, it turns out that you can use this sensor to observe the so-called denaturation of the selected model protein with high sensitivity and in real time.”

“This opens up a new field in analytical chemistry: real-time mid-infrared spectroscopy of liquids,” Hinkov said.

Potential applications are diverse, ranging from the observation of thermally induced structural changes in proteins and similar structural changes in other molecules, to the real-time analysis of chemical reactions in, for example, the production of pharmaceutical drugs or in industrial manufacturing processes.

The work was carried out in collaboration with the Bernhard Lendl group of the Institute for Chemical Technologies and Analytics.