Hungarian artist Mihály Kolodko erected a Russian-Ukrainian war memorial under cover of night on Monday morning. The small statue can be seen on the Moscow Promenade in Budapest, along the Danube Bend.

The ongoing war between Russia and Ukraine has inspired many artists. One of them is the Budapest artist of Transcarpathian origin, Mihály Kolodko, who created a bronze sculpture to commemorate current events.

The work of art naturally carries its own symbolism: the mini-bronze is placed on a white finger emerging from the ground as a base, and represents a Russian warship with Russian President Vladimir Putin at the helm.

According to Kolodko, the days when the manufacture of a statue was determined centrally are over. The Hungarian artist thinks that space should also be given to the interest of artists and people. This is how, for example, the statue of the lamplighter was erected in Uzhgorod in 2010, which brought him fame in the art world.

Another dimension of public sculpture was born when he found the theme of mini-sculptures, which he believed could have the same dramatic power over the viewer as the giant sculptures so much in demand today. This idea inspired the statue in question

which can be seen on the promenade from Moscow to Budapest, along the Danube Bend.

The artist has not always had a client to carry out his projects. Due to the lack of financial resources, he decided to create his ideas small so that they would not be lost. The tiny sculptures quickly grew in popularity, so much so that several were stolen. The term guerrilla sculpture refers to sculpture that is displayed in a public space without permission, although initially there were no regulations to do so.

His early guerrilla work was inspired by his favorite childhood fairy tale character. The 15cm statue is located opposite the Parliament on Halász Street. This series of tales was also important for him because he learned the Hungarian language by watching it – reported by Wikipedia.

Having placed his previous works in the center of Budapest, Kolodko was also innovative in his choice of location. He found the perfect place for his war memorial, both symbolically and practically, on the banks of the Danube.

The visual drama of the work – and its spiritual essence – is the difference in scale: compared to the tiny warship, the stone finger, carved with simple tools, seems gigantic. Here, it is not the Russian party which is the giant and the Ukrainian dwarf in comparison, but the reverse. In the fabulous world of Kolodko, this is not surprising – reported by 444.hu.

Kolodko is not only affected by the war in general, as a Transcarpathian, his parents and several relatives still live in the war-torn parts of Ukraine. 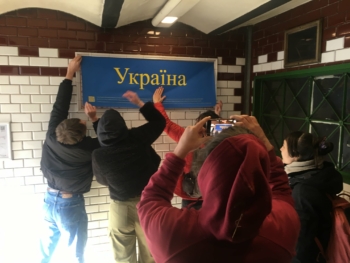 Read alsoCreative actions in Hungary to show solidarity with Ukraine