Miniature totem poles were carved in the early 1900s as popular objects for tourists, but some replicated life-size totem poles and are the only record of the original today (Corinne Smith/KHNS)

The Haines Sheldon Museum will present a new exhibition of Lingít miniatures, which will showcase not only the artistic works, but also the stories of the Lingít people forced to adapt to the rapidly changing times of the late 19th and 20th centuries. Reporting by Corinne Smith of KHNS.

The new exhibition will feature a variety of Lingít miniatures, drawn from the Haines Sheldon Museum’s collection of 23,000 objects. This includes small-scale objects like totem poles, canoes, and dolls, which were popular as children’s toys. The items were both artistic and practical, says the museum’s collections coordinator, Zachary James.

“Little spiritual figures, sort of talisman like objects, amulets, rings,” James said. “And then the halibut hooks too.”

James is Lingít, with ancestry in the Chilkat Valley, Wrangell and Stikine Basin. He points to a doll with a stone face and a calico dress. With the introduction of Western culture, he says the designs and materials used show how the Lingít took them and adapted them into new forms of art.

“After western contact and the fur trade, there was a real explosion of art from southeast Alaska and just the northwest coast,” he said. “Because increased wealth, more trade, new materials, steel became widely available. And so it was easier to produce more sculptures, and new ideas were coming in too. And in the old traditions , they were taking these new ideas and making new things.

With the arrival of Russian, European, and American traders in Southeast Alaska during the 1800s, the Lingít exchanged and adapted new materials in cultural practices, clothing, and art. 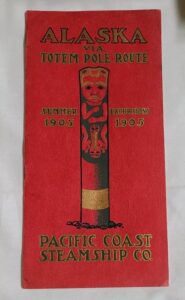 “(The assumption was) either the Natives had to assimilate into a monetary economy or they would disappear. But either way, their old traditions wouldn’t survive,” James said. “That’s how they promoted it, like ‘seeing natives in their natural habitat before they disappeared’, which we know isn’t true now, but that was the thought at the time.”

James says that beginning in the late 1800s with the Klondike Gold Rush and the massive influx of missionaries and settlers, fish traps decimated salmon runs and harmed the traditional livelihoods of the people. Indigenous. Lingít artists therefore began to produce miniatures for tourists.

“So all of these things were happening. This has compromised the traditional economy and the Lingít people here. So many people turn to producing souvenirs for steamship travelers to supplement their income.

The Lingít, mainly women, settled on the quays and sold to tourists.

“We have a lot of old photographs of steamship travelers, and it’s almost always women selling their wares,” James said. “And among the baskets that the women are weaving, there would be little totems and little sculptures that the men have made.”

James says the Lingíts may have turned to small-scale art for sale as an act of economic survival, but at the same time the style and craftsmanship were exquisite. And, miniature totem poles are sometimes the only surviving record of life-size totem poles that exist today, depicting significant stories and crests of the 30-foot originals.

James says the exhibit will feature stories of well-known sculptors and provide the public with an opportunity to learn more about the Lingít people from the early 1900s to a time of cultural oppression and change.

“Understand the period and what people were going through at that time. What kind of pressures were culture and art under at that time, what they had to do to keep making art,” he said.

Although this is an exhibition of miniatures, the stories and legacy of Lingít arts are larger than ever at the Haines Sheldon Museum.

The Lingít Miniatures exhibition opens at the Haines Sheldon Museum on Friday, March 25 and will run for eight weeks until the end of May.